It frequently happens that I have an empty seat next to me on the flight to see Mom in Paris, Texas, U.S. I remember last time when there was one empty seat on the entire flight and it became the one next to me. The attendant leaned over and said, “I moved the gentleman next to you to another seat; I thought you would prefer it this way . . . “

This time, there are a few empties spread around—-in a pattern, I suppose, to distribute the weight—-and one of them is next to me.

Ooh! It is time for free in-flight beverages and I will get a Bloody Mary mix, no ice please.

She is backing toward me, dressed all in black. Stockings too. Medium heels. Boots.

I can hear her offering assorted snacks to people and then taking their drink orders. A hiss and pop as cans are opened. She’s giving it all away for free: granola, nuts, crackers.

No “Biscoff, ‘Europe’s favorite cookie to have with coffee’”?

She’s looking at me and I can’t talk.

“Bloody Mary mix, no ice please” is what I croak out, just couldn’t say it only croaked it because as I explained, “I think those are the first words I have said today . . .”.

I’d heard her offering assorted snacks to people before me, but I was set on asking for her finest cookies instead. Was it even an option? But before I could croak myself any further, there they were in my hand. 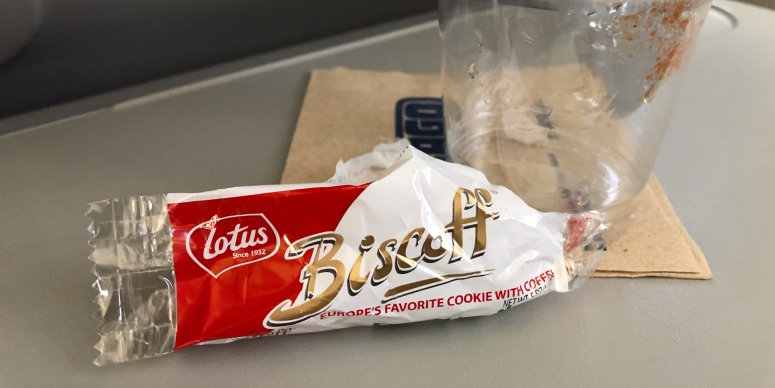 She offered nothing else but what I wanted then she gave me what I imagined . . .

I, cloudy thoughts now, and she ‘cross all seas!

We with our lots, bow and fall to our knees

I really do just keep thanking God for his benevolence. I feel like Brother Lawrence must have felt when he expressed the idea that it really is too good so simply be thankful, and when it is really bad be surprised it isn’t any worse!

I had my cookies and my mix, savoring them barely, and I confess: this time I thought first of Europe and her cookies and last of Mary and her blood.

It was, you know, her blood:

At the cross, as surely as there is meaning in shed blood, his mother’s blood also flowed with our Lord’s . He had some of her sweat too. Her grit (Mary got it from her Mama’s side), her tears, and her spit

yeah spit and he does not like it when she spits into her cloak or on her finger and cleans his face especially in public and then he grows wiser and gets it and smiles/just looks up, way up and whispers ‘do I really gotta do this?’

Then he’s grown and gone and years later

he spits and makes mud that heals

and it still has her spit in it too.

And we are cruising way above the clouds now with that comment so I am breathing deeply, and becoming aware of my body for just a sec. it was seven seconds, I counted. Amazing that in that time, three things happened. As I breathed, just breathed, and become aware my ears popped again. That caused me to smile and release the pressure, causing me to belch in a dainty way, relieving other pressure.

TURBULENCE 10:37 a.m. PDT typed in caps in case we crash and I don’t make it and later they try to resurrect the data on my computer maybe. It was turbulence of some kind, FAA people!

If this is it and I don’t get to tell you in person:

I suppose when ascending we give tacit ascent to descending too, if we are decent.

There is really something about being in an airplane that keeps my head in the clouds.

I can feel us begin to point toward earth now, either to descend for another hour and a half? Or to level us out at a lower elevation temporarily?

It’s the temporarily level one. We are still above the clouds but quite smoothly so.

I fade out for a bit thinking about that and here it is again:

All black, backing toward me, hair pulled back in a short-ish pony tail and handing me cookies again and the Bloody Mary mix and yes I did not say it I could only croak it out again, and then said “Ugh, I gotta get our more, talk more.” A laugh and behind me down that aisle it goes and my electrolytes are better now, much better, after two of the small cups of Mary’s mix.

More amazement at the thought. Just two cups, a taste really, of the mixed blood, and the body is healed.

It is dreamy up here and even if I turned around and looked backward, even if I got out of my seat and ran backward, I am surging ahead faster than the sound of music.