It could have been anywhere.

But it was in a restaurant, sorta like this one: 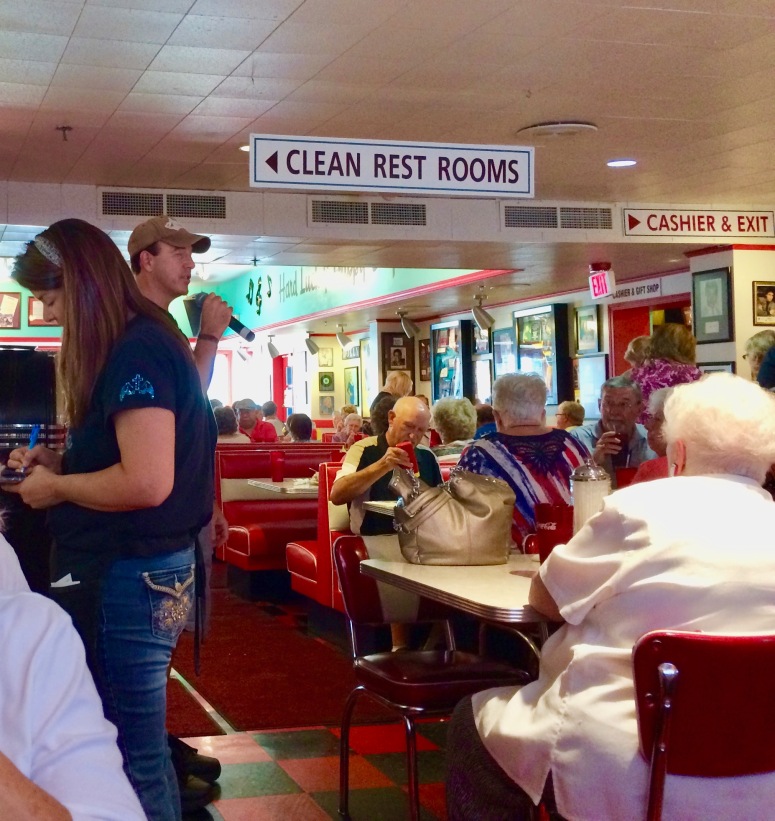 With no signs directing me to the restrooms, I figured it was the door with a note on it, scribbled in marker: “Leave bags at the front desk.” I asked one of the guys and he said yep that’s it.

[I’m editing before I publish and I just realized that the restroom did have a note on a door leading (who knew?) to it, so that makes it the most notable rather than the least notable difference and such is the kingdom of heaven.]

Returning to theme here, it could have been anywhere, but it was the church Men’s Breakfast, the last one of the season, at THE BOMBER restaurant. Back in the day, there was an actual airplane out front, maybe a bomber? The menu is a list of items and meals with WWII names, terms, and landmarks, e.g. The Bombadier (a large combo plate).

Laughter permeated the room, and for some reason it was centered down at the table, the last in the row, where I sat. There were many stories being told around that table, and it was so nice to see church guys having fun and later eating (mostly too much) without a care, because it was universally agreed—before I arrived, apparently—that breakfast is the most important meal of the day.

A prayer would be led before we ate, of course, and so we began. The lofty words of praise and petition were being uttered from one of the guys I knew better than most, and he was uttering them well. Just as he was in the conclusion phase of the prayer, just as he was forming the final syllables, speaking the last few words of the phrase, “In Jesus’ name, Amen”, we heard—far more loudly!— the words, “WHITE CLIFFS OF DOVER” (a toast plate with perfect egg whites adorning the “cliffs”).

The waiter whispered that he was so, so sorry, and one of the guys shouted, “Don’t worry,! You brought the food, and that is an answer to prayer.”

Nice, I thought to myself. Everyone is okay and prayer can be fun and God invented comedy, and the world is now a better place–all because of a waiter and a quick-witted older gentleman.

It happened this time at a Men’s Breakfast, but it can happen anywhere.

One thought on “Anywhere”